Tarpon is an ancient fish species that have remained relatively unchanged over the last 65+ million years. They have been around longer than any other popular gamefish and can live up to 90 years, spawning countless times during their lives. Tarpon was first written about in 1847 and was named “Megalops” which translates to “large eyed”. The earliest description of a tarpon caught by a fisherman was 10-pounds and caught by James Henshall. Another interesting fact about tarpon is they are the only fully marine species that are able to breathe air through a bladder with four highly vascularized rows of lung-like tissue that can supplement breathing oxygen from the air.

While tarpon can live long lives, and breathe out of the water, they are also a relatively fragile fish if not handled properly. The Florida Fish and Wildlife Conservation Commission has set in place guidelines for the safe handling of tarpon to ensure they continue to be a robust fishery that is preserved for generations.

There are no minimum size limits for tarpon, however, a tarpon over 40 inches MUST remain in the water unless in pursuit of a state or world record using a tarpon tag. When Fishing outside of these parameters you are to keep a hooked tarpon, especially the gills, in as much water as possible while remaining safe.

The current Florida state tarpon record is 243 pounds, caught by Gus Bell in Key West in 1975. Fun fact, he was fishing with 20-pound test line when he caught it! What a fight that had to be!

The current all-tackle world record for a giant tarpon is 286 pounds, 9 ounces, caught by Max Domecq in Rubane, Guinea-Bissau, Africa on March 20, 2003.

Tarpon fishing is catch-and-release only. One tarpon tag per person per year can be purchased when pursuing a Florida state or a world record. Vessel, transport, and shipment is limited to one fish only.

Tarpon can be fished with hook and line only. Snagging, snatch hooking, spearing, and the use of multiple hooks in conjunction with live or dead natural bait is strictly prohibited. 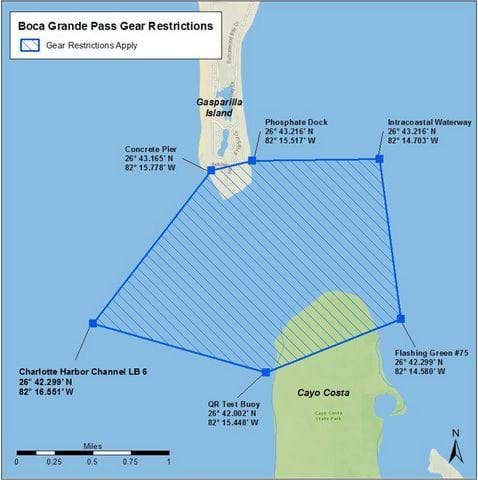 Following the safe handling guidelines will give tarpon a better chance at surviving, evading predators, and ensure that tarpon remain a strong fishery.